A new exhibition opened at the Neue Galerie Graz on the 14th of June. It is entitled Art Controversies and spans the years 1945 to 1967, a period that often languishes unnoticed between the Second World War and the revolutions of ’68. I was interested to see what the gallery would make of this topic, so I headed to the opening night.

The exhibition is a whistle-stop tour through many different artistic tendencies. It starts off with traditional imagery, with only a few paintings reflecting the modernisation and change of the times. Some pieces seem to come straight out of the middle ages, with sculptures of t 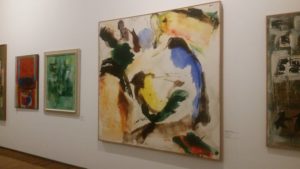 he Virgin Mary that appear to ignore the centuries that have passed. It seems that many artists – at least the ones showcased in this exhibition – preferred to ignore the events of the past few years, with no trace of any critical engagement with Austria’s role in World War Two. Perhaps that topic was just too close for comfort.

Walking through the different rooms, you can find paintings influenced by Futurism or Fauvism. Over time, the artists can be seem to embrace modernist tendencies, becoming more abstract – by the sixties, op-art has reached Styria.

This is an exhibition that showcases a wide variety of works – if you are interested in painting (this is the main focus of the exhibition) you will definitely find plenty to talk about. The sense of progression is particularly fascinating – there is a great deal of change in style and approach over the twenty years shown here.

The exhibition’s theme is, however, weaker than in Who are you (which has been adapted and relocated to the ground floor and can be seen until March 2019). So if a strong theme is a must, this may not be the exhibition for you. If, though, you want to find out what artists were up to between the end of the Second World War and the heyday of the sixties – and if you are looking for an exhibition showcasing a multitude of styles – this is definitely something for you to check out.

Curated by Peter Peer, Art Controversies – Styrian Positions 1945-1967, can be seen in the Neue Galerie Graz until 6th January 2020.