This is a tip for anyone living in or visiting the south of Austria. It is a walk, an art exhibition and an exploration of history all in one. The trail, marked by red signposts, takes you along a section of the Austrian-Slovenian border, crossing it several times (so remember to take your passport, just in case!). You’re accompanied by an audio guide (available in German or Slovenian), which you can either borrow on MP3 player from a nearby restaurant, or listen to via an app. Although, audio guide is a bit of a misleading description – it has more in common with a radio drama or a play. Beginning with philosophical musings about the nature of borders, the following chapters are filled with stories told by and about local people living on and with the border. You hear about the farmers who continued to trade and communicate with each other despite the dangers. About groups of people who fled either north or south, crossing the border to make a better life for themselves and their family, or to escape persecution. And about just how arbitrary a border often is, imposed on the population by leaders gathered in a meeting room, hundreds of miles away. 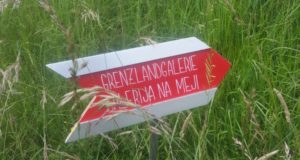 Walking through woodland and fields and past vineyards, there is plenty of time to take in and enjoy this beautiful landscape. But this is a hike with depth. You learn about the lives and livelihoods behind the beauty – and the way that people have been forced to deal with and make use of borders. This is something that is as relevant today as it ever was – now, for EU citizens, the borders between EU countries are almost invisible, but this is far from being the case for everyone. Just because the dividing line is (at the moment) not marked by walls or barbed wire, doesn’t mean it isn’t there.

As you follow the trial, you’ll find wooden picture frames highlighting views of buildings or trees that played an important role in the life of locals. Or that point out the randomness of demarcation. The landscape itself becomes the artwork – and as you step behind the frame, so do you. 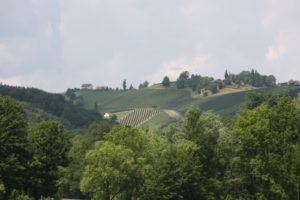 After coming full circle and returning to the Guesthouse Vračko, where you borrowed the MP3 players, you’ll definitely be in need of some food – and probably also some local wine. Don’t try to resist temptation here – it is definitely worth stopping for a bit longer!

This walk is a project by an international artist’s collective named LJUD – its members focus on areas as diverse as cultural anthropology, music, history, architecture, acting and art. And they have very effectively combined all these elements to create a 4.5 kilometre exhibition that stays with you long after you have left it behind. Recommended for anyone interested in history and art – as well as for all lovers of beautiful landscape.

1 reply on “Exploring the border”

Sounds awesome! Looking forward to visiting this place soon… and of course to the great local wine.